Marvel’s Doctor Strange was a big hit in 2016, which was directed by Scott Derrickson. Doctor Strange is one of the blockbusters in Marvel movies. Which have also won an academy award for the best visual effect and also the cast was really good as the main character was Benedict Cumberbatch from sherlock holmes. After the success of Doctor Strange, the character has also been seen in the Avengers Infinity War and after that in the End Game.

Before Super Bowl in Multiverse teaser

Doctor Strange in the Multiverse of Madness teaser has given a glimpse of Scarlet witch In which she was doing some kind of ancient practice and this type of scene is also seen in Wanda Vision and this scene, she might be doing some practice from the Darkhold book as we have seen her in the multiverse in the Wanda Vision. Wanda is also connected to time and reality that’s why Doctor Strange seeks to help her as he said at the beginning of the teaser that he knows very little about the multiverse and the multiverse is the way beyond and as in the teaser she might stay dark in the upcoming movies.

After the official teaser by the Marvel studios of Doctor strange in the Multiverse of Madness, any type of theory can’t be believed, and also the mistake Wanda has made in Westview is ignored by Doctor strange or maybe he didn’t aware of that mistake due to multiverse and that’s why fans are saying that they are expecting Wanda in Doctor Strange’s sequel but with the twist in the teaser where Wanda said that “I made mistakes and people were hurt” and Doctor strange replied that “I am not here to talk about Westview” and asked Wanda what do you know about the Multiverse. Because fans are expecting some normal from Doctor Strange but after the first teaser, all the expectations are on the other level and all the fans are excited about the movie.

Loki’s Connection to the Multiverse :

Loki was also connected to the multiverse in the Disney series of Loki and this might lead to a cameo of Loki in the multiverse of madness. As we have in many marvel movies Loki came back every time he died and this might be one of the reasons that Loki can be seen in this Doctor Strange sequel this year. In the Loki series of Disney plus we have seen Loki with another variant from the other universe and after that, we have seen the same thing in Spiderman: No Way Home also, In which all the 3 Peter Parker from different universes meet and fight with the villains from all the spiderman movies.

We also think after the Iron Man’s Death in the end game Marvel is trying to make Doctor Stange as big a star as Iron Man, Benedict Cumberbatch is a superstar can take the place of Robert jr. as a dope avenger in Marvel Studios. Also, the director of doctor Stange’s sequel is changed and now Sam Raimi has taken the palace of the Scott Derrickson and fans are expecting a lot from Sam Raimi as he was also the maker of the Spiderman trilogy. You can see the teaser of Doctor Strange in the Multiverse of Madness below the line.

After the second trailer of Doctor Strange In Multiverse of Madness, the hype is looking crazy as Sam Raimi has done great work as seen in the trailer. The first thing in the trailer was about Doctor Strange’s nightmare and Doctor talking about his nightmare. The first scene looks like a scary horror movie, as we know Raimi is has done great work in horror movies. This scene shows the presence of Sam Raimi in the movie.

The trailer also shows a moment when he is in a different costume, which seems like coming from another universe and fighting for Doctor Strange against the dark forces. This might be doctor strange’s new look we are going to see at the end of the Madness. Strange is also seen fighting the Mordo and 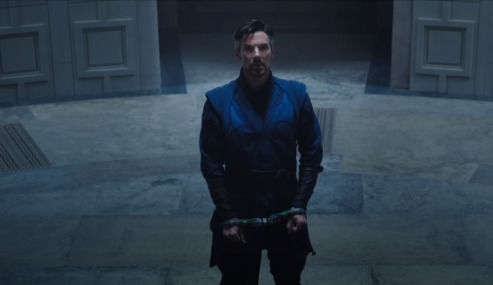 In the super bowl trailer doctor strange has been handcuffed by some short of iron robots for the crime he did by helping Peter Parker in No Way Home and there was a location look-alike a TVA, which we have seen in Loki’s web series. Also, we have seen going for that trail very calmly as that might be some bigger superhero from the multiverse we are going to see during the trials.

In this trailer Wand is also seen fighting with Captain Marvel. Although this is just assumption we are making as the girl looks like Captain Marvel in the trailer also Wanda is badly beaten and she is also in blood. Wanda Maximoff has been also seen in the Westview with the other Scarlet Witch from the other universe. After the super bowl fans are just really excited for the wanda plot in the movie.

There are many monsters seen in this super bowl trailer with a horror vibe and also the music and the animation are really crazy in the Doctor Strange in the Multiverse of Madness as MCU is know for great visuals. You can watch the Super Bowl Trailer from below the link.

All the theories are going to down on May 6, 2022, when Doctor Stange in the Multiverse of the Madness will be released, and also after that, we are going to see Thor’s another part too.

Do share it with your friends and loved once. FactShell

The Batman Never Seen Before: A Deep Dive Into The Batman  

Peacemaker Season 2 Confirmed!! Everything You Need to Know!

Thor: Love and Thunder – Everything You Need to Know

5 thoughts on “Doctor Strange in the Multiverse of Madness After Super Bowl Trailer!”